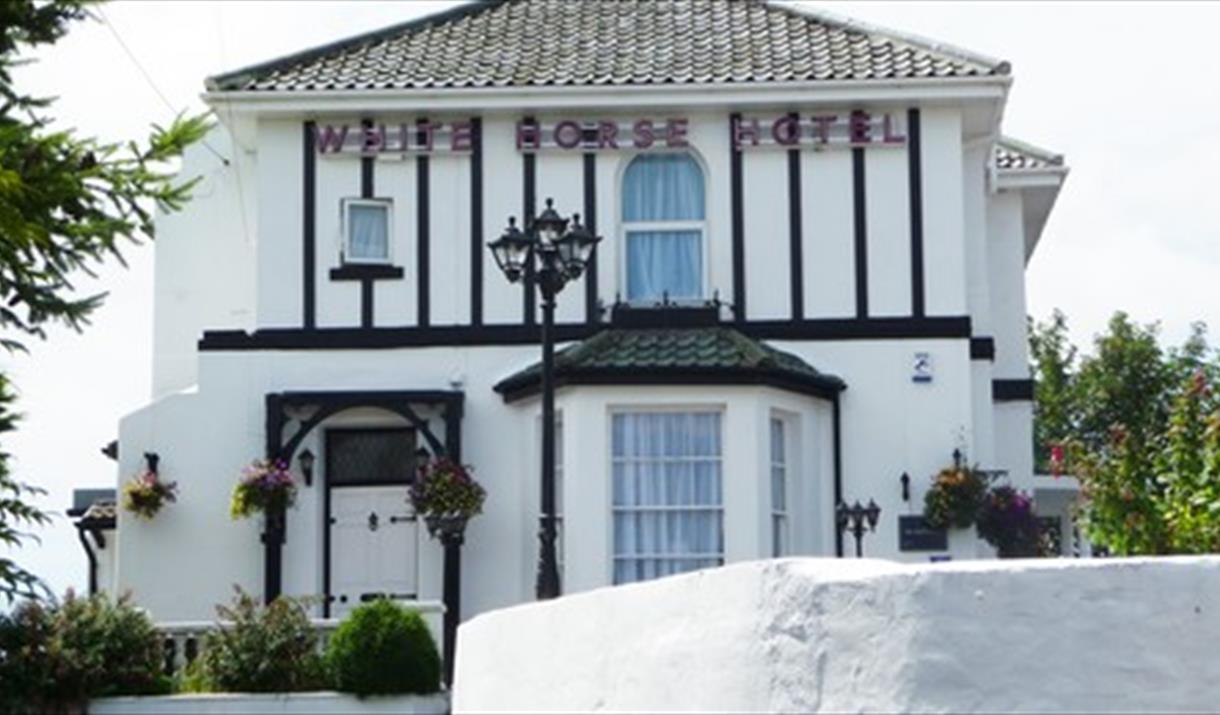 The White Horse is a detached Victorian villa situated next to Churston Station on the Paignton – Dartmouth steam railway (trains run from February to January between 11am and 5pm). We are situated a distance from the main road, which affords peace and quiet for guests, but also close to many local amenities and attractions in Brixham , Paignton and Torquay . There is an excellent bus service  to Brixham and Torquay.

The White Horse retains many of its original features whilst providing modern amenities. We have 8 rooms - doubles, single, twin and one family suite (comprising of 1 double bedroom and 1 twin room. This is best suited for a family rather than 4 adults). All rooms are en-suite, have LCD TV’s , tea and coffee, hairdryer, toiletries and towels. Free parking and free WiFi internet access are provided for guests use. We have a large secluded garden, which guests are welcome to use.

Our tariff includes breakfast, with a choice of hot breakfasts on offer, alongside continental, cereals, fruit and fruit juice, toast and preserves, tea or coffee.  The White Horse has a licensed bar and lounge for guests, the bar is open until 10.30pm.

The White Horse was built in the 19th century. Known as “Richmond Villa” it was built by Lord Churston, the land then being part of his estate. The railway was constructed in the 1860's and Lord Churston being on the railway board sold off parts of his estate enabling the line to continue into Kingswear and the Brixham branch line was created. Today our garden gives lovely picturesque views, sporting steam trains running between Paignton and Kingswear. The house passed into the hands of John Williams-Bennett, a local schoolmaster, in the 1890's. As his 13 children grew up and subsequently moved on, paying guests were taken in and "Richmond Villa" became the White House Hotel.

During the Second World War it is reputed that General Eisenhower was a guest, which was possible  as the area was inundated with U.S. troops on exercise for the D-Day landings, or maybe his visit was a morale boosting exercise,  after the loss of almost 1000 troops during Exercise Tiger at Slapton Sands. In the mid-1960's the “White House” became the “White Horse”, the owners at the time having horse racing connections. Since 1991, the building has undergone a programme of restoration uncovering some very fine examples of Victorian workmanship.