You are here: Things to Do > Battlefield Live 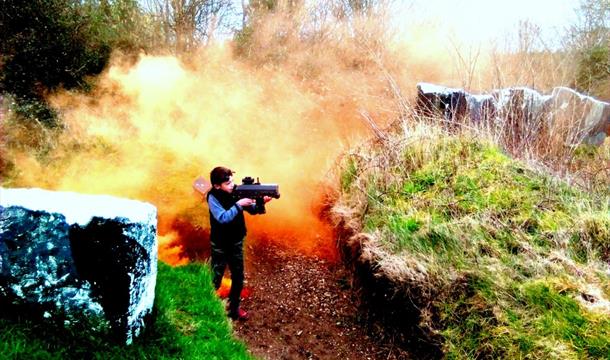 Battlefield Live an exciting infra red combat game using sensor recognition and up to the second feedback provided by your gun, it’s next generation gaming and it’s here on a superbly designed 3 acre Battlefield in Torbay.

Its the closest thing to being in a game of Call of duty or Battlefield 3………….. but it’s for real!

The weapons  fire a harmless infrared beam, just like your TV remote, so its totally eyesafe. Everyone has three sensors, two worn on the head and one on the gun which you aim for. The guns tell you if you hit someone or if you have been hit yourself.

So, unlike paintball or airsoft , Battlefield Live has no  flying bullets, better still no bruising, no mess, and no steamy mask to wear.  As there are no bullets there are NO EXTRA COSTS, you pay to play and its  free to shoot as often as you like!!

If you lose all of your  lives , your gun stops working , so noone can cheat, and the gun will tell you if you shoot someone who is “dead already”.

Even if you do lose all of your lives  you don’t have to sit waiting for the game to end to have another go, due to the  unique “respawning” facility on the medic box. Press the button and you are suited and booted ready to play on, after all that’s what you’ve come to do!

Teams play out various scenarios during a session. Missions are altered to suit  every level and age of player. Some of our most popular are:

Finish your experience with the ultimate chaos ‘free for all’, where there’s only one man left standing at the end.

Could it be you?

Who can play Battlefield Live?

Minimum age is around 8, the guns weigh 2-3 kilos,  you will be running in long grass and dodging in and out of bunkers and hiding places, so the very young could tire quickly and no one wants to let their comrades down .

Its also important to be able to understand the mission and the instructions.

If you have any doubt , call at the Battlefield and try out a gun for size.Battlefield live is also great for girls of any age , – so everyone can play to a level they find comfortable! from casual player to the seasoned veteran.

Rules have to be obeyed and these are shown here under the basics tag.

Under 16s need to have a parental consent form signed by the parent or group leader. There’s a copy of one on the Bootcamp tag.

Situated on the A3022 next door to Brixham Park and Ride