You are here: Things to Do > Oldway Gardens 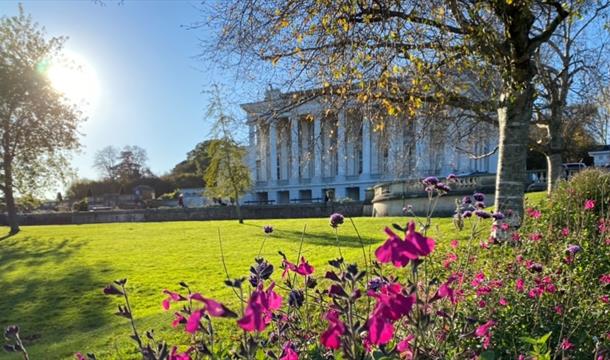 Oldway gardens are beautiful grade ll heritage gardens to found in Paignton in the heart of the English Riviera. The gardens and Oldway Mansion are often referred to as the Jewel in the Crown of Torbay. This 17 acre garden, which is open to the public free of charge, forms the grounds of Oldway Mansion which was originally built for the founder of the Singer sewing machine company, Isaac Merritt Singer between 1873 and 1875, and was remodelled, along with the gardens by Isaac’s son Paris Eugene Singer between 1897 and 1907 in the style of a mini Versailles.

The South Side of the mansion meant to resemble the music pavilion or ‘Petit Trianon’ of Marie Antoinette and the main gardens were designed by the French landscape architect Achille Duchene. Amongst the features to be found are two patterned Parterres, supposedly resembling the decal of an old Singer sewing machine of that time.

There are numerous flower and shrub borders, planted with sustainable long-flowering plants, as well as many unusual and interesting trees, bushes, palm trees and exotic plants, including several subtropical species, which grow well in Devon’s sheltered and warm climate. There are paths which take you down to the recently restored pond. A waterfall can be seen falling over a rocky grotto which feeds the pond below. On a hot day, there are cooler woodland walks, through towering pines, where many squirrels live.

Depending on the time you visit, a cafe, plant stall and tea hut may be open, all run by volunteers.

Oldway Gardens are open 24/7 the grounds have been tended since September 2019 by Oldway Gardens Volunteer Group (Registered Charity Number 1196635) is probably one of the biggest gardening community projects in Torbay.

This impressive garden is maintained totally by volunteers belonging to the Oldway Gardens Group, a registered charity.