You are here: Home > Things to Do > Decades Torquay 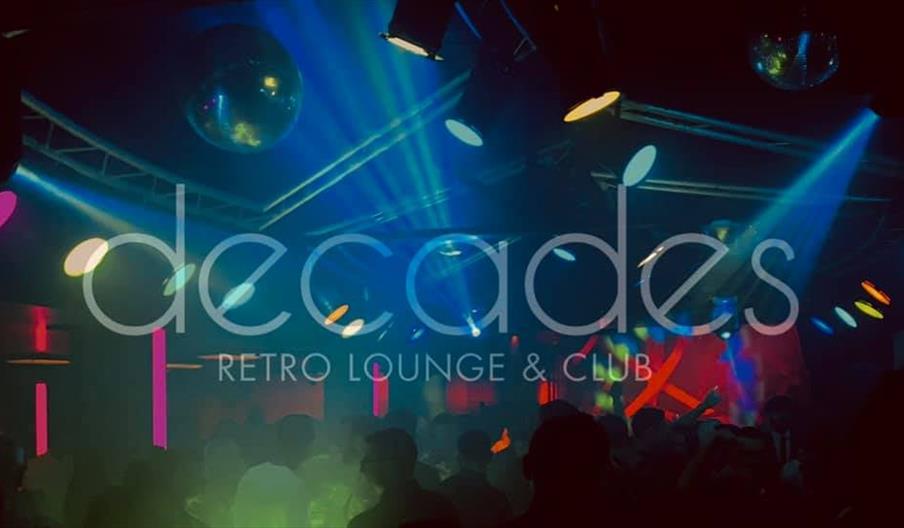 Decades is the perfect destination for your party. Get in touch so we can pre-order the glitter!

Birthdays - At Decades Retro Lounge & Club, we know how to throw a party.
If you’re trying to decide where to celebrate the next big birthday with your nearest and dearest, look no further than Decades! We can accommodate any sized party and have tonnes of fantastic ideas (and buckets of glitter) to make your night extra special! If you want to fill our club floor with dozens of your favourite people or just gather a few friends round a bottle of bubbly then get in touch!
For an unforgettable night, celebrate your birthday at decades. We’re not exaggerating about the glitter, either.
Psssst: we can do surprise parties, too!

Getting Married In The Morning - Yes, it’s ladies’ night and the feeling’s right. You’ve sorted accommodation; the outfits have been chosen. Now all you need is the perfect venue for the night of your life! We can accommodate all sorts of parties and provide buckets and buckets of love and sparkle to make your hen party unforgettable. Get in touch for good times!

School Reunion - We love a bit of Nostalgia at decades. If you are arranging a reunion with your BFFs we provide the coolest school reunion packages!

Cocktail Making - “Paradise is drinking cocktails in Torquay.”  When the great Audrey Hepburn uttered these immortal lines, no words were spoken in disagreement. It has since become a universal law – You go to Torquay to drink cocktails.
We offer a variety of fun cocktail masterclass packages for any sized group so you can start off on your journey to become as good as that bloke from Cocktail!

If you’re interested, get in touch with us to find out about our tempting packages!

For decades, Torquay was the playground of the rich and famous.
The Victorians established Torbay as England’s favourite holiday destination and it was still the number one spot during the swinging seventies!
For a century, The English Riviera was the place to be if you were fabulous, wealthy (or fabulously wealthy) and wanted a bit of R&R with other like-minded demigods.

If you were something special, killing time for a week or two in Torbay was just what you did!
An entire afternoon’s conversation would be spent in London’s Belgravia discussing favourite drinking spots in Torbay and sharing discoveries of new places to sit and picnic (No coincidence that Belgrave Road is named as it is)

The rich and powerful elite who popped to Torquay for a cheeky post-war Dom Perignon on Oddicombe beach would naturally gravitate towards one another and conversation quickly turned to finding the perfect place to party away from the riff-raff that filled some of Torbay’s more homely establishments.

In 1967, whilst sunbathing with Sidney Poitier in Torquay’s Imperial Hotel, Charlton Heston witnessed a hapless young waiter by the name of Alnardo trip and unintentionally throw a plate of mussels over Rita Hayworth. Naturally, chaos ensued.
Putting aside his Planet of The Apes script, Mr Heston shared a glance with Mr Poitier that changed the course of history.

From that day, the rich and famous would congregate in secret, at a different location each week, for a party fit for Gatsby himself. The cream of the crop were imported to wait on them hand and foot, and truckloads of the finest premium alcohol was consumed by the most stunning people in the world right here in South Devon.

Torquay is a small town, and it wasn’t long before rumours were spreading, but it was during an un-televised interview in 1997 that Sophia Loren finally let slip that such an elite club actually existed. Legend has it that on this very day, Sandra Bullock and Tony Hadley made the decision to move the elite club to Los Angeles, where the parties continue to this day.

It’s 2017, and five decades have passed since the fateful day on which Rita Hayworth was startled by a tray of mussels with white wine and shallots, and the immortal lines “Get your stinking hands off me!” were directed at sweet Alnardo.

Decades Retro Lounge & Club is our homage to those great and beautiful people, whose photos adorn our walls and whose music has influenced our cocktails. Legend has it that one day the rich and famous will return to Torquay for a party to end all parties. Until then, we lay in wait for their arrival as we perfect the art of bartending.