You are here: Things to Do > Cary Park Tennis and Putting Green 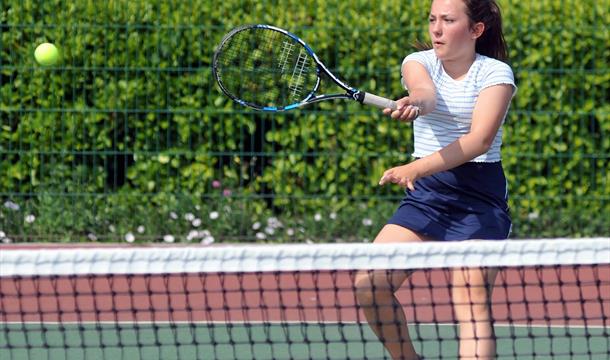 CARY PARK JUNIOR TENNIS CLUB, founded in October 2001, a small, friendly community based club set up to encourage youngsters from the whole community to play tennis and....

MARINE TENNIS CLUB, for over eighteen year olds, was founded over fifty years ago in Torbay.

The result of this amalgamation is the perfect club for all ages to enjoy tennis - six great all-weather courts and an eighteen hole putting green all in a lovely setting!

The Club is based at Cary Park, Cary Avenue, Babbacombe, Torquay

We also have an outdoor table tennis table which is open to the public.

Welcome to Torquay, a traditional yet thriving seaside town set on Devon's English Riviera coast.  If you haven't visited for a while, then banish those thoughts of a resort that has seen its hey day.... the best is yet to come. With its iconic palm trees, busy harbour, international marina, sandy beach and wonderful array of continental style cafes, restaurants and cocktail bars, the scene is set for the perfect Devon seaside holiday or short break.

This quintessential bucket and spade resort appeared in The Guardian in late 2016, being described as one of "Britain's most booming seaside towns, undergoing a style revival with Michelin starred restaurants and swanky yachts"!  You only have to drive along the seafront or take a stroll along the promenade to know that this is true.