You are here: Home > Things to Do > Babbacombe Cliff Railway 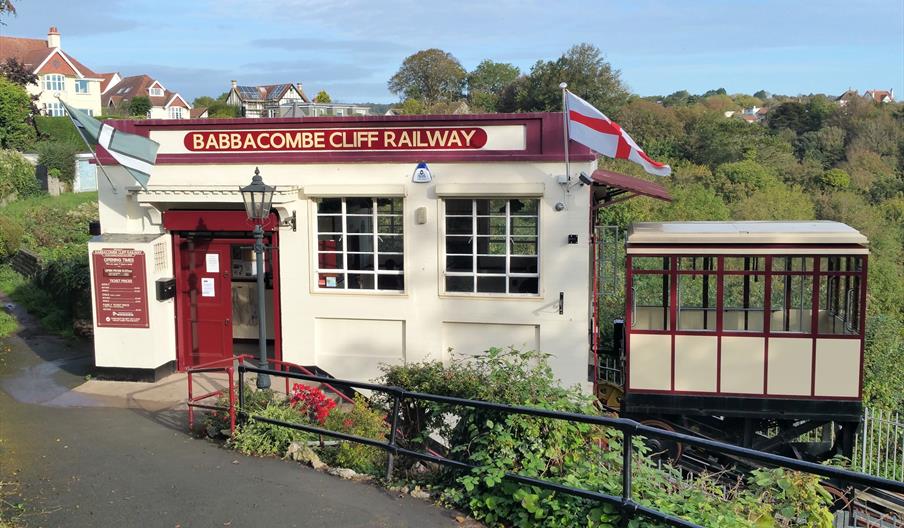 We would like to remind our customers that you will need to wear a face covering to travel on the Babbacombe Cliff Railway.

An English Riviera UNESCO Global Geopark Key Site built between the gaps in the 73m high cliffs: a fault line between the Devonian grey limestone and Permian red rocks.

Built in 1926, the Babbacombe Cliff Railway has shuttled hundreds of thousands of holiday makers to and from Oddicombe Beach since it first opened in 1926.

Surrounded by some of the most breathtaking scenery to be found in the UK, the Cliff Railway provides a vital and non-exhausting way for locals and holiday makers alike to soak up the peaceful atmosphere and take in the amazing views as they travel to and from the water's edge.

Complete with beach cafe, seasonal water sports and deckchair hire, it really is a must-visit beach.

While you're there, make sure you keep your eyes peeled for seals and the dolphins.

Babbacombe Cliff Railway is in excellent condition, there is a Seasonal Visitor Centre (free admission) on the beach and a host of fantastic events with hoards of people enjoying some great times on the railway and on Oddicombe Beach. Due to Covid-19,  our Visitor Centre will remain closed for the 2021 season.

Since 2009 the Cliff Railway has been run by a Community Interest Company which became a Charitable Incorporated Organisation in March of 2019.

The purpose of the Community Interest Company is to preserve, protect and promote the Babbacombe Cliff Railway.

In 2012 Babbacombe Cliff Railway opened a Visitor Centre on Oddicombe Beach which is free to wander around so why not pop in and learn more about the history of this fabulous, funicular railway?

* 2021 Opening dates to be confirmed
Opening Hours: 9.00am until 4.45pm daily. Please check for maintenance updates on our website.
Due to Covid-Secure restrictions, please expect queues.

From Torquay Harbour head up the main Babbacombe Road, turn right at Babbacombe Downs Road and the Cliff Railway is situated on your right hand side.

Please visit the Stagecoach website for details of which buses run to Babbacombe Cliff Railway.