You are here: What's On > English Riviera Open Bowls Tournament 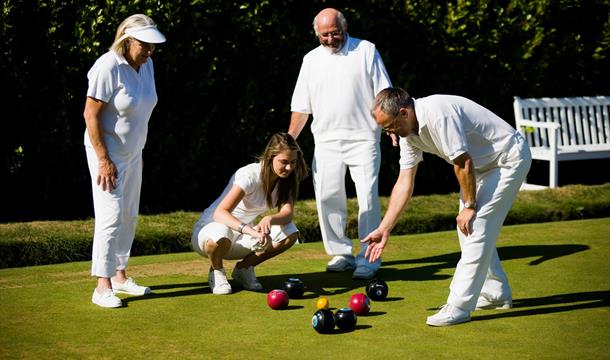 The English Riviera welcomes all bowlers to participate in this friendly but competitive tournament.

Over the years bowlers from all parts of the U.K. as well as from Holland, South Africa and Australia have participated.

We endeavour to provide good facilities and bowling conditions at our three host clubs, Kings, Torquay and Victoria B.C.’s which are all located on the main Torquay sea front and within easy walking distance. We particularly thank those who have regularly supported us over the years, trust they will continue to do so and hopefully introduce new faces.

The English Riviera Open Bowls Tournament, which started in 1994, succeeded the previous Torquay Open Tournament which had ceased after the 1992 event.

The Torbay Council, concerned at the loss of the event, called a meeting of interested parties in the late season of 1993 and it was resolved to restart the tournament under its new name.

The Council agreed to undertake all administration, publicity and financial responsibility and a committee of local bowlers was formed to advise on bowling aspects and to steward the event.  It was agreed that the Council would safeguard the trophies, which had been obtained from the previous event and these would, together with cash prizes, be awarded annually to winners and others as detailed in the programme.

With the club's cooperation, the greens of Torquay B.C. and Kings B.C. were used in addition to the two Council owned greens in Abbey Park. Initially, the competitions held were Men's & Ladies Singles, Men's & Ladies Pairs and a Men's Triples. By popular demand a Mixed Pairs was added in 1995.

From 2004, the Council began a gradual withdrawal of it's involvement with the event and the organisation passed to the bowling committee. It is presently run by that committee with elected officers, a Coordinator, Assistant Coordinator and

Treasurer. The Torbay Council do, up to the present time, award an annual grant to assist with the running costs.

In 2006, the committee welcomed the involvement of the Victoria B.C. based at the Abbey pavilion.  In 2010, one of the public greens on the Abbey was privatised and the facility was lost to the committee. The competition continues on the greens of the three host clubs.