You are here: Stay > The Headland Hotel & Spa Torquay 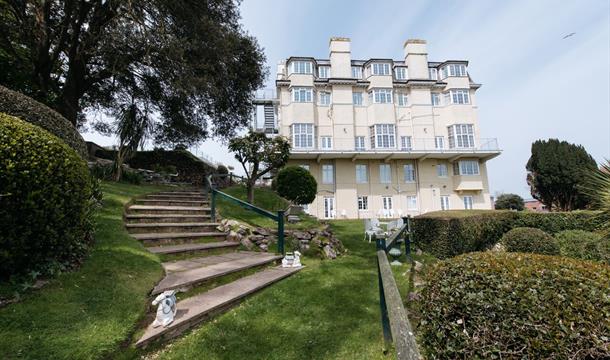 This elegant 3 Star, AA rated hotel is located in one of the most scenic areas of Torbay retaining many original period features. The Headland Hotel & Spa sits majestically on the headland in two acres of magnificent grounds with breathtakingly uninterrupted sea views. Being just a short walk along the coastal footpath from Meadfoot Beach, Ilsham Valley woods, Torquay Harbour, Town Centre, Seafront and bustling promenade. The Headland Hotel & Spa is in the ideal location to explore everything Devon has to offer.

The Headland Hotel and Spa bedrooms offer everything you need for a perfect night’s rest.

With 78 comfortably furnished en-suite bedrooms, including rooms with sea views, we cater for everyone’s needs from family to single rooms. All rooms offer complimentary fibre optic Wi-Fi, complimentary refreshment trays and flat screen televisions. The majority of rooms are serviced by a lift and ground floor rooms are also available.

We have various room grades – Standard, Club, Executive and Royal.

Our Standard Rooms are the most compact rooms in the hotel, mostly with a view of the valley or gardens.

Our Club Rooms are slightly larger than Standard Rooms and nearly all have a beautiful garden or sea view. Our Executive Rooms are fabulous, spacious rooms with spectacular sea views across the bay, offering a fruit bowl and bottle of water upon arrival and an extra comfortable seating area.

Begin your day with a hearty full English breakfast as well as continental items in The Romanoff Restaurant, named after the family who once resided in the building for their British Holidays. The restaurant offers a Table d’Hote menu, created by our team of passionate chefs, to provide our guests with a delightful culinary experience consisting of six mouth-watering courses. The sea views from the restaurant are second to none and only add to your complete dining experience. Wherever possible, our chefs use fresh, locally sourced produce to create all items on the menu.

The Gallery Lounge is the perfect place to spend the day whether you are in the mood for a delicious lunch for two, a traditional afternoon tea party with the girls, a quiet cup of tea or sneaky cocktail. If the sun is shining, why not sit out on our Sea View Terrace and let the picturesque settings take you out of this world.

The Hydro Spa and Harmony Beauty rooms is the perfect place to relax and unwind in a simply tranquil environment to improve your total wellbeing. The Hydro Spa offers a beautiful, Roman style space with 3 hydrotherapy pool swim spas, where you can benefit from hydrotherapy, targeted exercise at a speed set just for you or you can spend some time purely relaxing in the Jacuzzi. You can then cleanse your skin and mind in the steam room or sauna. You can also work out in the gym.

Our beauty therapists will be happy to complete your total wellbeing experience with a relaxing beauty treatment.

There is quality live entertainment every night of the week throughout the whole year in our Gallery Lounge. Here is your chance to dance the night away on the dance floor or sit back and relax with a cocktail from our fully stocked bar while enjoying the variety of entertainment offered, whether it be a comedian, magician, cabaret act or singer.

Between the months of March to December the hotel offers an optional evening trip on Wednesday evenings to see a variety show at the Babbacombe Theatre.

The Headland Hotel and Spa’s friendly staff, tranquil location, elegant décor, fine restaurant, all-year round entertainment and luxury spa facilities will ensure your stay is a memorable one.

The Hotel was originally called the Villa Syracusa, a private home built for the Russian Romanoff family. While the Romanoff family were in residence, they entertained the family at the Villa and during their absences, the villa was often let privately.

In February 1890 the Villa Syracusa was opened as a convalescent home for soldiers and sailors invalided from the Boer War in South Africa. The home closed on 14th December 1901.

The Torquay Hydro Hotel retained its name until approximately 1950. However, it ceased trading as a hotel in 1939 and for the war years, it was bought to house the Prudential Assurance Company’s offices and staff when they were evacuated from London.

After the war, the hotel building was sold and became the Carlton Hotel. In 1956 it was purchased by the Worker’s Travel Association, which changed the name to the Highmead. In about 1966 the hotel became known as the Overmead.

The previous owner purchased The Overmead Hotel in November 1998. Since then 32 bedrooms and a new entertainment suite have been added, and other improvements are constantly taking place. In January 2009 the hotel changed its name to reflect its wonderful position, becoming The Headland Hotel. In 2015 it underwent a major refurbishment and now boasts a modern Gallery Bar Lounge, entertainment suite and a terrace with uninterrupted views across the Bay. In 2016 an indoor spa complex was opened.

In March 2017 the Headland was purchased by its current owners, Providence Hospitality who continue to invest in the Hotel.

From At Torquay, head for seafront. Turn left at seafront. At mini-roundabout turn left, and at 2nd take 2nd left towards harbour. Go straight up hill past Imperial Hotel. At the top turn right, then right again, we are last Hotel on the left.