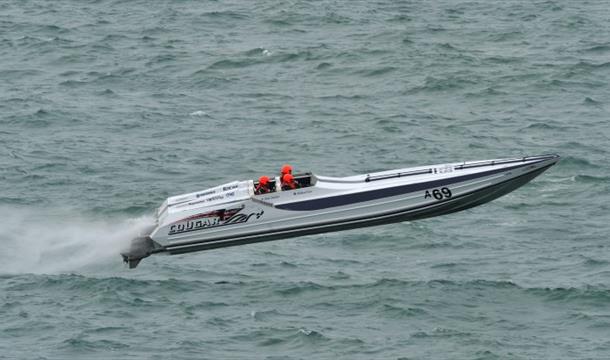 The Cowes - Torquay launched offshore powerboat racing as a sport in Britain in 1961 and is one of the most spectacular powerboat events in the British sporting calendar.

The Cowes - Torquay - Cowes race covers a distance of 182 nautical miles. The record of two hours, eighteen minutes and five seconds was set in 2008 by Fabio Buzzi, Simon Powell and Rafael Del Pino from Italy in the boat ‘Red FPT’ at an average speed of 91.1 mph.

Torquay will be the finish line of the Cowes-Torquay leg of the Powerboat racing event. The competitors will refuel at Haldon Pier. (We are waiting for timings).

It was all rather different when the race was first run 57 years ago this summer, the contest was the brainchild of the newspaper tycoon and second world war fighter pilot Sir Max Aitken (left), who had seen the Miami-Nassau Powerboat Race that began in 1956.

At the time, powerboat racing was a perfect fit with America’s affluent profile. It was spectacular, and offered upwardly mobile enthusiasts an opportunity to compete on level terms with their old-money counterparts.

At the London Boat Show in January 1961, Sir Max proposed that a similar race should be staged in England between Cowes and Torbay.

The concept gripped the public’s imagination, and there was huge interest and television coverage when the contestants set off from the Royal Yacht Squadron at 10 am on August 27th. Among the 27 boats roaring up the Solent was Huntsman No. 8, owned by the holiday-camp entrepreneur Billy Butlin and skippered by the former test pilot Peter Twiss.

Seven hours and 17 minutes later,Thunderbolt, a Christina-hull craft driven by the former saloon-car racer Tommy Sopwith, crossed the line in first place, having traveled at an average 25 mph throughout.

They were a racy crowd, the 1960s powerboating set. In 1962, Sir Max Aitken competed personally, and the following year the amateur steeplechase jockey Bill Shand-Kydd finished second. But the most intriguing of those early contestants was Shand-Kydd’s brother-in-law, Lord Lucan, who attempted to win the race three times.

The seventh Earl, who notoriously vanished in 1974 after apparently killing his children’s nanny, made his début in 1963 at the helm of a 25-footer called White Migrant. Lucan was in the lead and still going well when White Migrant stopped suddenly and sank beneath him just south of the Needles. Lucan and his co-driver Bruce Campbell were both rescued unharmed. His Lordship tried again, but equally unsuccessfully, in 1964 and 1965.

‘The race became the leading race in Europe, if not the world and internationals say you haven’t really achieved anything unless you’ve competed and finished the Cowes-Torquay’, says power boat racing expert Ray Bulman.

‘In 1968 when the UIM (Union Internationale Motonautique) introduced the World Offshore Championships they required races of 150 miles to qualify so it became Cowes-Torquay-Cowes’, added Ray.

The late Tim Powell took it over in 1979 and ran it single handed until 1999. Current Event Director Martin Levi took over in 2016.

‘The race is now limited to mono hulls. The first catamaran appeared in 1977 but it altered the race overnight, because they were very expensive and, of course, they were built for smoother seas’.

In 2010, the British Powerboat Racing Club held a celebration in Cowes to mark the 50th anniversary of the race, when Italian powerboat racing legend Fabio Buzzi triumphed driving Red FPT at an average speed of 59.58 mph.