You are here: What's On > Brixham Town Band 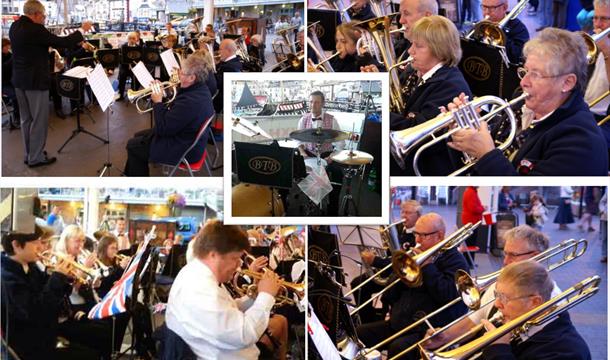 Records exist showing bands in Brixham since 1896. Now known as the Brixham Town Band we are a local brass band playing concerts on the Brixham quayside Monday and Thursday evenings throughout the summer.  Go to our Studio page to hear tracks from our last CD and other pieces. Whilst we play mainly for fun we do various concerts for charities and other local organisations throughout the year and we encourage new players of any age and ability to come and join in with us – Training Band

These are our current players:-

Phil Cleave - Musical Director - Phil was Born in 1958 and started playing at the age of 8 along with both parents and 3 brothers who were also playing and made up a large section of the Newton Abbot Town band. In 1971, with the help of a small group of other players the Cleave family formed the Totnes Band. The Totnes band quickly worked its way up to the 2 section in the late 80’s and 90’s. In 1974 Phil moved to London to work in a piano factory making John Broadwood pianos, and also joined Championship section band “The Hanwell Band” on tenor horn. Phil played on the backing track of Peter Skelern’s You’re a lady, recorded the music for the TV program That’s life with Esther Rantzen, and played on the backing track of Terry Wogans Floral Dance. In 1977 the Hanwell band played at the silver jubilee concert in the Royal Albert hall with Black Dyke, Fairy Engineering, Fodens and Morris Motors. Phil also played at the National finals in the Albert Hall on 2 other occasions, and won many other contests around London and southern counties. The band also made regular appearances on the BBC’s Friday night is Music night. In 1978 Phil returned to Totnes after getting married to Alison and working on the family farm, and moved from horn onto Solo Euphonium and has played with many local bands as a dep.

Dave Phillips - Deputy Musical Director & Baritone - Dave is also on the committee and has been with the band for many years playing numerous instruments from cornet to bass. Having been our MD for several years, he has recently (April 2017) returned to playing giving the MD reigns to Phil Cleave. Dave remains Deputy MD and currently directs our training band

Sharon Hubbocks - Cornet - Sharon is an established professional musician playing violin. She joined the band late in 2018 to take up the cornet and has already become a valuable addition to the cornet section

Joy May - Cornet - Having previously played bass with the band, Joy returned to us in summer 2015 to play cornet and is currently only able to join us occasionally as work permits

Norma Buckely - Flugel Horn - Norma has played with the band for many years and on a variety of instruments - cornet, horn & baritone - but is now settled on Flugel Horn. Along with a variety of support roles Norma looks after uniforms and, along with husband Roy, the band's music library

Paul Crouch - Baritone - Paul has been invvoled with the band for many years and can turn his hand to Bass, Euphonium or Baritone. Due to work committments is currently (2018) just an occasional player

Roy Buckley - Bass Trombone - Roy is a committee member, our band librarian, custodian of the band equipment trailer and helps with any instrument maintenance issues

Andrew Kilner - Percussion - Andrew is one of our committee members. He joined the band in September 2015 and has played for various military bands all over the world