You are here: What's On > Brixham Pirate Festival 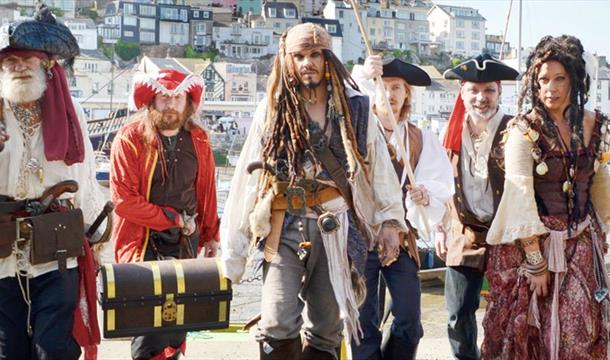 A swashbuckling mix of piratical fun and entertainment! There will be LOTS of pirates, military and period re-enactors here with guns and cannons to make plenty of noise!  We will make sure there is plenty of music too with shanties and pirate rock.

Why not stay over for the festival?  Click here to search for accommodation availability.

Come to Brixham on the first Bank Holiday weekend in May and join a mass gathering of Pirates from all walks of life. With amazing live music, street entertainers, a Shanty Town, a family area, living history exhibits and skirmishes (very loud bangs and cannon fire!).

The full programme is available via www.brixhampirates.com.

Evening concerts are now SOLD OUT

The Brixham Pirate Festival is an open, town-wide festival with the epicentre being on the harbour, with it’s main stage under the Old Fish Market.

While there are a number of car parks around Brixham, spaces to park are limited during the busy festival, so we also recommend using the Park & Ride which is located outside of town.

On Being a Pirate...

Anyone can be a pirate at the Brixham Pirate Festival!  Whilst there are no guidelines or requirements for dressing the part or how you want to express your piratical nature, there are some requirements that must be followed when it comes to the law:

Swords are allowed as part of your costume, but must be “peace tied” to the scabbard, belt or sash, using rope, leather thong or zip-ties.   Security will be on the lookout for weapons not peace-tied and they will have zip-ties on hand should you require a means of fastening them.

It goes without saying, swinging swords about or firing your flintlocks into the crowd is strictly a no-no!

One of the mainstays of our glorious festival, are the live skirmishes and reenactments! Militia, military and of course piratical, forces clash in a fantastic demonstration at select times over the festival weekend.

During these demonstrations you will see swashbuckling sword fights, ships being boarded, firefights and cannon fire!

Whilst these demonstrations are safe and exciting, some of the gun and cannon fire can be very loud, so we suggest ear protection for children and animals, or to put a little distance between yourselves and the action.

The fantastic Trafalgar Gun Company, wearing authentic uniforms use reproduction gun-decks, guns on carriers, and artillery to give audiences a small taste of what it would have been like to be in a nineteenth century naval battle.

For Brixham Pirate Festival 2022 they will be firing from a 10 gun deck, are bringing a gun-deck with 10 firing guns (times of displays to be confirmed)  and a small galleon which we hope will also take part in the skirmishes with the ship Atyla that will be moored nearby on the event pontoon.

They will be with us for all 3 days of the festival! Expect Very Loud Bangs!!
Wander  down to see them, by the Event Pontoon and Churchill Square, on the way to the Marina.

The wonderful Tall Ship Atyla will be sailing to The Brixham Pirate Festival from Bilbao, her home port.  With an impressive construction story and history, Atyla has also remained in the same family her entire existence. Atyla’s current innovative project is building an international community of sailors skilled both on and off the water.

The Brixham Pirate Festival is world renowned for it’s ability to bring together some of the most fantastic piratical performers on the Seven Seas, and this year will be no different!

The Dolmen - The Dolmen are a relentless organic Celtic rock band

Black Friday - All aboard the good ship Black Friday – join her crew and captain Tom for another stormy crossing of the Celtic sea of folk-punk.

Fury - a Heavy Metal band from the West Midlands, UK

Old Time Sailors - a large international crew of musician sailors who bring the below-decks of the nineteenth century previous  to life, with music, songs and many  many instruments.

Seas of Mirth - have been stamping their own mark on modern music for the last decade, mixing up styles and genres while also being known for their aquatic twist.

Gurdy Bird - Based in Cornwall in the UK GurdyBird is inspired by the worlds occupied by Playford, the City Waites and Nine Inch Nails, via Adam Ant. She plays a symphonie Hurdy-Gurdy over her backing tracks which she performs, programmes and records herself

The O’Marleys - They play traditional Irish, Scottish and some USA folk music dances and songs. 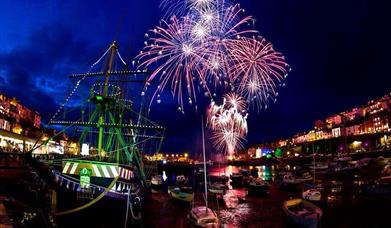 Golden Hind Museum Ship, BrixhamThe Golden Hind at Brixham, Devon is a full sized replica of one of the most iconic ships from the age of exploration. The Ship has been a feature of picturesque Brixham harbour for over fifty years, entertaining and educating thousands of visitors during this time - as well as being featured on…