You are here: Home > Things to Do > Torbay Golf Centre 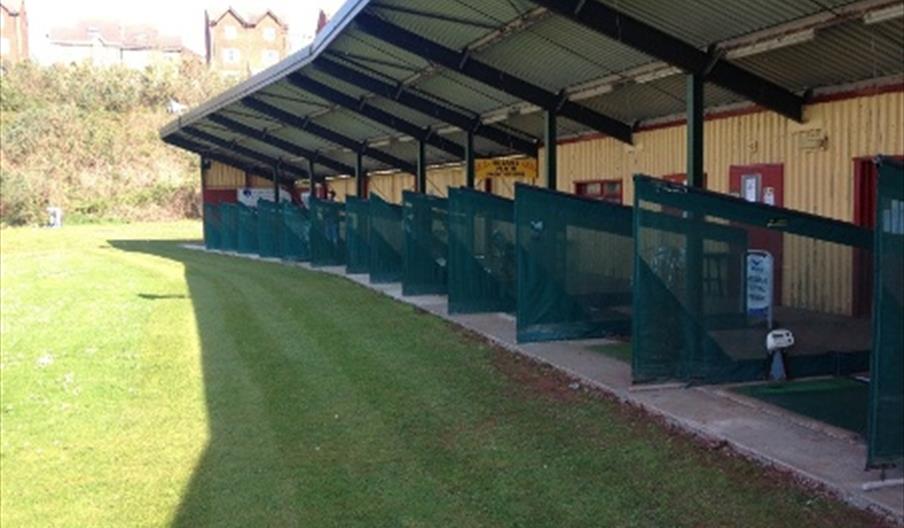 The Driving Range boasts 28 Undercover Bays with 6 outside Bays, it has various targets and distance markers down range, including a trampoline, barrels, a unique ‘Trotters’ yellow van at 145 yards, Tyres at 80 and 150 yards, a large green at 160 yards with a 170 yard post , Rugby Posts at 200 yards.

Which are constantly undergoing upgrades and refurbishments, which has also added a short game practice area in front of the Driving Range with three greens, 3 tees and a bunker where golfers of all abilities can practice this most important aspect of the game. There are more projects planned in the coming year, including the design of 9 Tees for a short course.

The Driving Range is situated in Clennon Valley, next to Holburn Holiday park, facing North, sheltered from the prevailing winds and no need to shade the eyes from the Suns with plenty of car parking. There are various prizes offered including ‘hitting the Trampoline’ competition which was won by a 9 year old boy in its first year and last year by Robbie Thompson a 2 Handicap golfer from Torquay Golf Club.

The Driving Range is very welcoming and kept in good order by Neil and greenkeeper Stuart Shipley with particular care given to keeping the greens neat and tidy. The retail Golf shop is run by Richard Francis.

The price of practice balls is very low at £2 for 20 from a new coin operated machine, opening times at 9.30AM to 8PM Weekdays, and 6.00 PM at weekends.

Coaching with a PGA Fellow Professional - Neil Holman is a PGA Fellow Professional who Specializes in one to one coaching. Using the latest GASP system, with three fixed cameras in his teaching studio, and a Huxley indoor putting green to sort out the lack of holing enough putts. Another area Neil specializes in is within 100 yards and now with the popular Amen Corner short game area.
He can deal easily with all aspects of the short game from lob shots, pitching, chip & run, bunker shots and all awkward lies. Available all year

Foot Golf - Torbay Golf Centre can now offer a full 9 hole or 18 hole Full Golf experience for all the family, we are open from Monday to Sunday, so come along and join in the fun.