You are here: Food and Drink > The Elephant Restaurant by Simon Hulstone

The Elephant Restaurant by Simon Hulstone 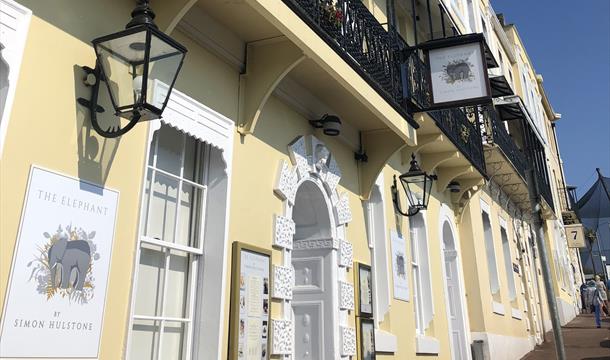 * We are open Tuesday through to Saturday, lunch and dinner

Fine dining at its very best! The multi award-winning Elephant is a Michelin star restaurant, overlooking beautiful Torquay harbour. Award winning chef Simon Hulstone runs the restaurant with his wife Katy and his talented team of chefs and friendly front of house staff. Simon has won multiple awards for his creative cuisine, and has represented Great Britain in prestigious competitions around the world. At the Elephant, they offer a changing menu based around local and sustainable ingredients, using the abundance of fantastic produce available in South Devon. They have a dedicated farm, based in Brixham which provides the team with delicious seasonal produce and free range chicken, lamb, pork and Kelly Bronze turkeys.

The Elephant restaurant is a bright, informal seaside restaurant which overlooks the beautiful Torquay harbour.

Run by chef proprietor, Simon Hulstone and his wife Katy, it was the first restaurant in Torquay to be awarded a Michelin star which it has maintained for 15 years.

The Elephant is relaxed, friendly and serves the best value Michelin starred lunch in the UK.

We aim to source our ingredients locally and sustainably, many from the restaurant’s dedicated farm in Brixham but we do look further afield if it’s something we’re really excited about. All the dishes change regularly depending on which locally grown and reared ingredients are at their best.

The Elephant welcomes children of all ages however we no longer except dogs unless they are service dogs and we have been given prior notice.

SIMON HULSTONE - Simon has been cooking professionally since his school days and is one of the UK’s most decorated chefs.

By his early teens he already had several World Junior titles to his name and until 2011, he was the only British Chef to win gold in the World Skills in France. In 2003, Simon won the Roux Scholarship and he went on to win the Craft Guild of Chefs National Chef of the Year award in 2008. Simon has twice represented the UK in the Bocuse d’Or, the world’s most challenging and prestigious culinary contest.  He was captain of the British team in the Culinary Olympics and was also captain of the English Culinary Team at the Culinary World Cup in 2010 and 2012.

Passionate about the local produce and area, Simon is a self-made ambassador for the English Riviera and its fantastic produce. He especially champions the ingredients grown and reared on the restaurant’s dedicated farm in South Devon.

THE ELEPHANT HAS A FREQUENTLY CHANGING MENU THAT REFLECTS THE VERY
BEST SEASONAL PRODUCE. OUR SET LUNCH MENU IS THE BEST VALUE IN THE LAND
AND WE MAKE SURE THAT OUR YOUNGER GUESTS ARE WELL CATERED FOR TOO.

WE CATER FOR SPECIAL DIETARY REQUIREMENTS BUT IT’S BETTER FOR EVERYONE
IF YOU LET US KNOW WHEN YOU BOOK.

THE ELEPHANT IS A STUNNING LOCATION FOR EVENTS LARGE AND SMALL WITH A CAPACITY FOR 65 DINERS. WE HAVE A SEMI EXCLUSIVE UPPER SECTION THAT SEATS 40 AND A LOWER SECTION FOR 20 DINERS. FOR MORE INFORMAL OCCASIONS OUR BAR CAN HOST 40 GUESTS FOR CANAPÉS AND/OR DRINKS

The Elephant Restaurant by Simon Hulstone

From Torquay Harbour turn right at the Clock tower proceed along the harbourside. As you just start to go up the hill the Elephant is on the left and the car park is on your right.