You are here: Home > Things to Do > Ashfield 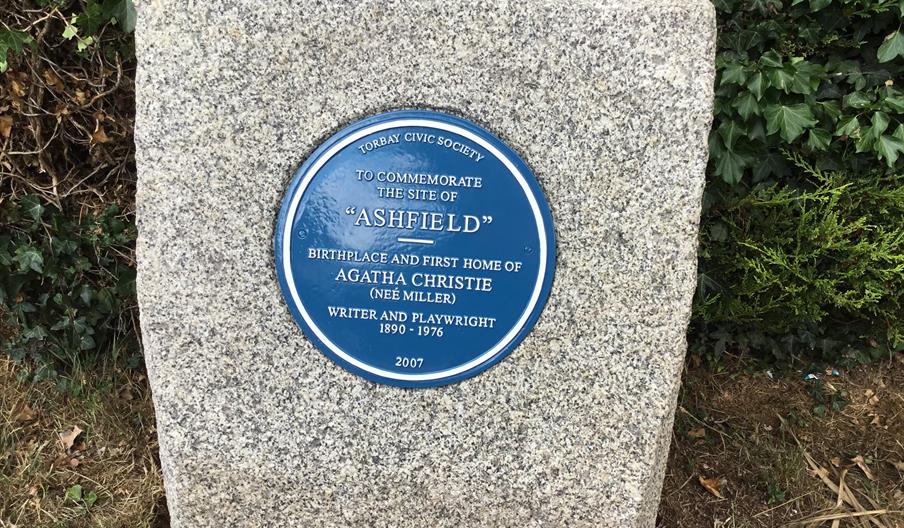 A Blue Plaque on Barton Road, Torquay, marks the spot of Ashfield, Agatha Christie's childhood home. Ashfield was a large Victorian mansion where Agatha spent a happy childhood with her parents, Frederick and Clara Miller, and her elder siblings Monty and Madge. Her autobiography describes their youthful escapades and the residing memories that the author has of this special place. She remained there until she married, and returned for the birth of her daughter Rosalind.

In her novel Postern of Fate, it appears that The Laurels was a representation of Ashfield.

She sold Ashfield in 1938, and the property was demolished in the 1960s to make way for a modern apartment block. It's still clear to see, however, the views that the mansion would once have commanded, and how the young Agatha would have enjoyed walking to the sea, and walking through the lanes and hedgerows at the top of Torquay.

Dame Agatha Christie is known throughout the world as the ‘Queen of Crime’ and considered a literary genius. Her books have sold more than two billion copies and have been translated into over 100 languages. She remains the unrivalled, most successful female playwright of all time, as well as a respected authority on travel, archaeology and pharmacology.

The English Riviera played a large part in Agatha’s formative years when the experiences, places and people she encountered provided the inspiration for many of the fictional characters and plots that she created within her much-loved stories and plays.