You are here: What's On > Dinner and Jazz with the Terry Quinney quartet

Dinner and Jazz with the Terry Quinney quartet 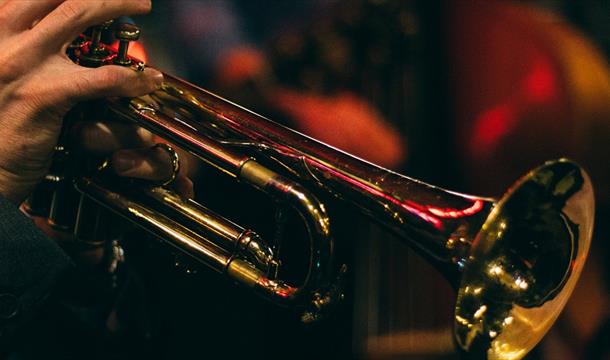 Liquid Spirit continues onwards and upwards, with a return to our
original concept of fine dining and quality, accessible live music in
plush surroundings - for the perfect night out.Hamilton's in
Babbacombe has offered us an amazing dining deal where ticket holders
receive a free glass of prosecco (or soft drink) on arrival and a
three courses dinner menu for £29.95. Given that this is less than
diners will pay downstairs in the main restaurant, for our diners the
music is then effectively subsidised by Hamilton's - a very generous
arrangement which shows what a great partnership this is. We have
their very smart upstairs function room to ourselves. Have a look  at
their website to see what is on offer.
https://www.hamiltonsclub.comThis month our featured artist is tenor
saxophonist Terry Quinney.Terry was born and raised in Saskatchewan,
Canada and was performing and touring with a number of local blues and
funk/soul groups by age 18. He received a Bachelor of Music from the
University of Regina in 1998 and, after a brief period as a showband
musician aboard a cruise ship, he relocated to London, England. Terry
spent two years in England teaching and working with musicians from
the U.K. and further afield. Terry returned to Canada in 2002 and
spent the next few years performing, touring, recording and teaching
extensively throughout western Canada. Terry has appeared numerous
times at the Saskatchewan Jazz Festival, The Regina Folk Festival,
Casino Regina and has performed with the Regina Symphony Orchestra. He
has appeared on CBC(national) as well as local radio and TV.In 2006
Terry moved to Toronto, Ontario to further his musical education at
Humber College, studying with Pat LaBarbera and Don Thompson among
others. While attending Humber Terry received the Douglas Richardson
Memorial Scholarship, The Bobby Herriot Award for Arranging and
Composing and the President's Letter and was fortunate enough to
perform with Randy Brecker, Kurt Elling and Dave Douglas. Terry
quickly established himself on the Toronto jazz scene and has
performed and/or recorded with Don Thompson, Bruce Cassidy's Hotfoot
Orchestra, The Toronto Jazz Orchestra, The Composer's Collective Big
Band, Down With Webster, Jay Douglas,  Classic Albums Live and many
others in all types of settings from small group modern jazz to big
band, from funk to free jazz, from pop to pit bands. Terry has
performed at the Toronto Jazz Festival and on City TV and has been
heard on CBC Radio and Toronto's JazzFM and at dozens of venues across
the greater Toronto area. Since moving back to the UK in 2009 Terry
has quickly become a fixture on the jazz scene.  He has performed all
over the UK at venues such as the Royal Albert Hall, The National
Theatre in London, Pavillion Theatre in Glasgow, Pizza Express Jazz
Club in Soho,  Boisdale of Canary Wharf, The Stables in Milton
Keynes, The Bull's Head in Barnes and numerous other jazz clubs,
festivals and theatres.  As co-leader of the 'The Sound Of BlueNote'
Terry has performed with UK jazz icons such as Nigel Price, Ian Shaw,
Mark Nightingale, Alan Barnes, Dave O'Higgins, Gilad Atzmon, Orphy
Robinson and Jim Mullen.He is accompanied by our house trio of Jim
Rintoul on bass, Tom Ball on piano and Preston Prince on drums.

Dinner and Jazz with the Terry Quinney quartet