You are here: What's On > Devon Yawl Association (DYA) Nationals 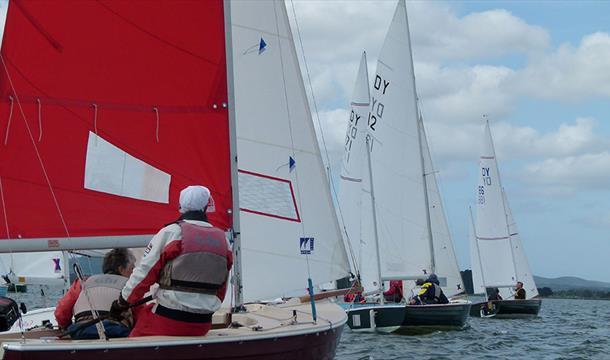 The first Devon Yawl, DY1, was launched on the 4 May 1968. The idea for the boat stemmed from the growing popularity of G.R.P. (glass reinforced plastic, or fibreglass as it is more commonly known) in small boat construction and the increasing costs of building and maintaining the all-wood Salcombe Yawl.

The background to the class is that it has evolved over some 200 years from the inshore fishing boats of the South Devon coast, which in turn were refined into the Salcombe Yawl for racing and picnicking.

The first Devon Yawls had red sails to distinguish them from the Salcombe Yawl’s white sails. The masts and spars were aluminium rather than wood. Also standard (Devon Craft or early) hull colour was light blue.

Since those early days there have been a number of refinements that have added to improved performance and appearance. Most Devon Yawls now have white sails as the cloth is both better and cheaper than the coloured. The masts and spars have gone from the heavy untapered sections to light tapered modern sections, and the fittings and controls are now such that the boat is both responsive and easy on the helm and crew.

Founded in 1937, the Brixham Yacht Club is recognised as one of the premier clubs on the south coast of England, as it continues to grow in both membership and stature.

The clubroom, formerly a sail-loft, together with the Jubilee Room Restaurant, provide panoramic views of the busy, but quaint, working harbour of Brixham and the beautiful waters and coastlines of Torbay and Lyme Bay.

Being adjacent to the harbour, The Brixham Yacht Club is accessible at all times and provides launching facilities at all states of the tide. The Club offers an excellent venue for social and competitive sailing and continues to host Open Weekend, National, European and World Championship events.